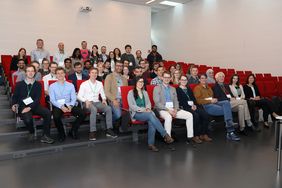 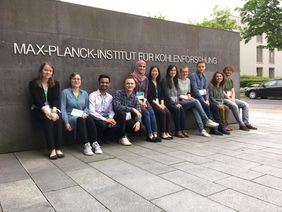 The symposium, "Catalysis Towards Greener Chemistry" (CTGC-2019), was held at the Max-Planck-Institut für Kohlenforschung which was organized by students of the IMPRS-RECHARGE. The symposium enabled participants to discuss the approaches and insights from different fields of catalysis (heterogeneous, homogeneous, bio catalysis as well as technical aspects) in the common context of green and sustainable chemistry. It has become more and more clear with time that the commonly used energy resources are either getting exhausted or pose serious environmental concerns, making it essential to hunt for alternative solutions. To this end, the symposium served as a great platform to discuss solutions by the development of new technologies at a molecular level with fundamental insights and at an industrial level with efficient implementations.

Over the span of four days, the symposium included keynote lectures by Frank Neese, director of the Max-Planck-Institut für Kohlenforschung, Beatriz Roldán Cuenya, director of the Fritz-Haber Institut of the Max-Planck-Society in Berlin, Ulrich Schubert, Professor of Chemistry at the University of Jena, Peter Styring, Professor of Chemical Engineering and Chemistry at the University of Sheffield, and Stenbjörn Styring, Professor of Molecular Biomimetics at the Uppsala University. The scientific programme also included 17 invited talks by academic researchers, 7 contributed talks by participants and a poster session.

The symposium welcomed over 60 participants from all over the world including countries like Turkey, United Kingdom, Sweden, India, China, France, Saudi-Arabia and Spain. In addition to the scientific aspects, participants also enjoyed a delicious barbecue served in the Mensa garden on 22nd May, 2019. The day ended with a poster session, with over 25 posters, which gave participants a chance to discuss their work in detail. The two poster prizes were awarded to Eduard Glöckler (University of Duisburg-Essen) and Marcell Papp (Budapest University of Technology and Economics) at the closing ceremony on 23rd May, 2019.

The students of IMPRS-RECHARGE had a great time organizing this symposium and learnt immensely from this experience. Overall, the event was a humongous success and all the participants including the keynote speakers and invited researchers enjoyed the symposium thoroughly.