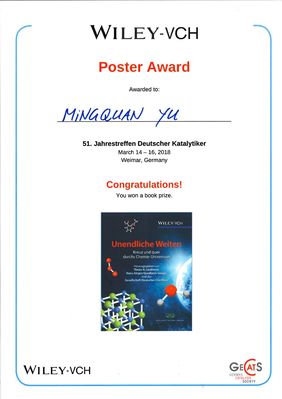 From March 14-16, 2018 the 51st German Catalysis Meeting took place in Weimar, organzied by the DECHEMA. Mingquan Yu, one of our IMPRS RECHARGE students took part in the event and won a poster award.

He got the prize for giving a short presentation at the posterworkshop "Electro Chemical H2 / O2 Evolution". His poster presented a novel method by using sustainable template to synthesis large-scale transition metal oxide nanoparticles for electrochemical water oxidation.

The German Catalysis Meeting is one of the most important European events in catalysis. More than 600 experts from universities, research institutes and industry meet annually to exchange their ideas and share new developments and the latest results in all areas of catalysis.

More information can be found on the DECHEMA Website.