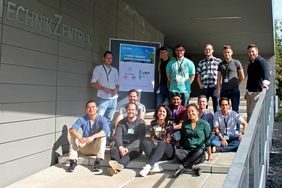 About 100 international scientists from various fields of catalysis research participated in the IMPRS-RECHARGE Scientific Symposium at the NanoEnergieTechnikZentrum (NETZ). The five-day event took place at the campus of the University of Duisburg-Essen from September 17-19, 2017.

The conference titled "Catalysis for Sustainable Chemical Energy Conversion (CSCEC2017)" focused on current developments in catalytic processes for sustainable energy conversion with the aim of a climate relevant decrease of CO2 emissions.
The keynote lectures concentrated on general concepts of catalysis for sustainable energy conversion, such as the electro-catalytic water splitting for the production of the climate neutral energy carrier hydrogen as well as the syngas conversion for the synthesis of high-energy fuels from CO2. Additionally, the conference offered the opportunity to discuss several presentations and poster contributions from the registered participants.

The numerous registrations and the broad thematic range of the conference contributions made the symposium a truly successful event. It was organized by the students of the IMPRS-RECHARGE and will be held regularly.